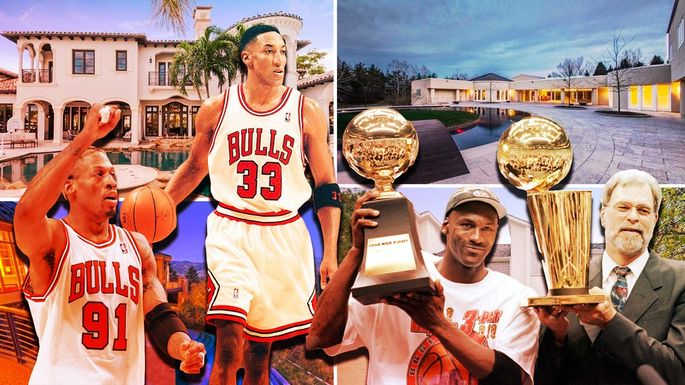 At a time with no live sporting events to speak of, sports fans have slaked their collective thirst with a documentary series. Which sounds strange, but so is life in 2020.

ESPN’s “The Last Dance” chronicles the story of the 1997-98 Chicago Bulls, a championship team on the precipice of splitting up while attempting to capture one last NBA title.
Ratings for the first two episodes of the 10-part show were astronomical, proving that there’s plenty of interest in a team from decades past. We were also intrigued—especially by their real estate.

Our interest was initially piqued by the scenes of Jordan kicking back and reminiscing, in what looked to be a massive mansion with an ever-present glass of tequila (?) at his side.

Those glimpses of a relaxed MJ at home prompted us to do a deeper dive into the homes of Jordan, Scottie Pippen, and the rest of the unforgettable squad forged in the fire of “The Last Dance.”

Yet despite his unimpeachable track record on the court, His Airness has met his match in his attempts to sell his massive Illinois mansion.

The superstar’s 7-acre custom estate went up for sale in 2012 for $29 million. Eight years (and a few price slices) later, the mansion is still languishing on the market.

Currently listed for $14,855,000, the 56,000-square-foot residence is equipped with a regulation-sized basketball court, infinity pool, putting green, tennis court, and cigar room. According to the listing details, each custom area of the home comes “with Jordan’s signature touch.”

On second thoughts, that may very well have been the roadblock to a sale—when a mansion is this customized to one man’s singular vision, it can be very difficult to find a buyer to make the leap.

Jordan and his ex-wife, Juanita Jordan, also owned an enormous 8,000-square-foot condo in Chicago. The triplex with amazing lake and city views took up the entire 40th and 41st floors at 1100 North Lake Shore Drive.

The four-bedroom unit also offered a number of luxe amenities, including a rec room, rooftop deck, and of course, a cigar room.

After the couple split, MJ took the mansion and Juanita took the condo. In 2012—right around the time Michael first attempted to sell his mansion—the condo landed on the market for $5 million.

It wound up selling for $3.2 million in June 2014—an apparent bargain, given its location, size, and pedigree.

Sharp-eyed viewers of “Last Dance” noticed that Jordan’s talking-head footage was apparently shot at his custom-built estate in Florida. His property covers 3 acres in the Bear’s Club, a private, gated golf community designed by the golf legend Jack Nicklaus.

Construction on Jordan’s 28,000-square-foot house began in 2010, and was completed a couple of years later. A local agent claimed that the Hall of Famer paid $4.8 million for the land and $7.6 million for construction, and that the home could be the most expensive non-waterfront home in the entire Palm Beach metro.

But for MJ, it’s all about golf and cigars. The 11-bedroom home sits close to the well-manicured greens of the exclusive private club and was reportedly built with a “cigar-friendly” media room.

It’s fitting that Jordan owns a home in the state where he finished off the “Last Dance” season with a memorable shot that defeated the Utah Jazz in the NBA Finals. He put his mountain modern retreat in Park City, UT, on the market last year for $7.5 million.

He’s willing to take a rare L on this deal—he purchased the five-bedroom home for $7.9 million back in 2007.

No surprise, given his penchant for the links—the 9,574-square-foot residence lies within the gated Glenwild Golf Course community.

Built in 2006, the home has an airy layout, with vaulted ceilings and walls of glass. The spacious interior includes formal living and dining rooms, a den with wet bar, gym, a golf simulator, and a theater with stadium seating.

Once a Tar Heels star, Jordan brought it all back home. Now the billionaire boss of his own NBA team, the Charlotte Hornets, he bought a 12,310-square-foot residence in Cornelius, NC, for $2.8 million in 2013.

The estate is right next to Lake Norman and the seventh hole of the Peninsula Golf Club.

Jordan also reportedly owns a condo in the uptown Charlotte highrise The Trust, probably as a crash pad for game nights. It was purchased by a Blackcat LLC that ties back to his business partner, Curtis Polk.

Fort Lauderdale, FL
We’ve covered Pip’s travails in the Sunshine State. The Hall of Fame forward has been trying to sell his Fort Lauderdale mansion since 2010.

The home has bounced on and off the market for years. A decade ago, it was priced at $16 million, and it’s now available for $9.8 million.

The waterfront home was built in 2004, and seems to have everything a deep-pocketed buyer might want: a pool, basketball court, gourmet kitchen, game room, and media room.

Local agents whom we spoke with last year said that while the home was impressive, it was also a bit dated, in an area where buyers have their pick of brand-new options.

The six-time NBA champ also has an Illinois home that he’s been attempting to unload for years. The five-bedroom residence landed on the market in 2016 for $3.1 million. In the years since, it’s had a steady progression of price cuts, to no avail.

The 10,000-square-foot mansion on 2.66 acres was on the market earlier this year for $1.7 million, but the listing recently expired with no sign of a deal in place. The home features an indoor basketball court festooned with the player’s jersey (#33!) on the floor. Other perks include a wine cellar, movie theater, and a pool with a slide.

In the off-season, Kerr keeps a family home in sunny San Diego County. His five-bedroom home in Southern California is within a golf cart’s ride of Rancho Santa Fe Golf Club.

It was purchased for $3.9 million in 2004, and Kerr has held onto this luxury home throughout the various jobs he has held in his post-playing days, including general manager of the Phoenix Suns and NBA broadcaster for TNT.

The 4,000-square-foot classic, which dates to the 1920s, offers views of the Golden Gate Bridge and the parkland of the Presidio.

With four bedrooms, a living room with a fireplace, and a formal dining room that opens to a patio, the home is situated in a quieter part of town, far from the lively Mission Bay area around the Chase Center, where the Warriors play.

When he was coming off the bench for the Bulls, Kerr owned a five-bedroom Colonial-style home in Lake Forest, IL. The Warriors coach sold the place in 1999, and it’s been sold a couple more times since he owned it.

When he was coaching the Bulls on their memorable championship run, the coach lived in Lake County, about 30 miles north of Chicago. His Bannockburn house was purchased for $280,000 in 1988, when he was still just a young assistant coach.

The coach with more rings than he has fingers, Phil Jackson has recently decamped to his home in Montana, where he’s spending time tending his garden.

After being unceremoniously dumped by the New York Knicks in 2017, Jackson placed his two-bedroom midtown Manhattan condo on the market for $4.95 million.

There’s no indication that the luxe unit in the Osborne Building ever changed hands, which probably means that Jackson has a very cool place to crash whenever he’s in the city.

After his acrimonious departure from the Bulls, Jackson headed over to the Los Angeles Lakers and reportedly picked up a home in Marina del Rey, CA, for $1.8 million in 1999.

The Marina-area home has four bedrooms and five baths, in just over 5,000 square feet. With three floors and an elevator, the luxury space includes an open floor plan.

In the 1990s, the NBA star with the multiple piercings and the multicolored hair was known for his preternatural rebounding ability—and his off-court antics.

During that era, the ferocious defender made Newport Beach his home and purchased a duplex. Real estate records show a transaction in 1999 for $500,000.

His agent at the time had his home and office there. As Rodman recounts in his memoir, “I Should Be Dead by Now,” his agent’s presence influenced his purchase. Rodman moved into the top unit, and converted the bottom apartment in the residential neighborhood into a nightclub.

The lower unit was outfitted with a bar, dance floor, and disco ball. Rodman was known to invite as many as 200 revelers, and to arrive by helicopter.

He claims to have been cited by the police 80 times over his eight years at the notorious residence. The party ended when Rodman sold the building. The multifamily unit last sold in 2005 for $3.9 million, according to realtor.com® records.

Another former Rodman residence in the Saddle Hill Ranch community in Orange, CA, came on the market in 2018 for $2.35 million. The ranch-style home dating to the 1970s had 5,000 square feet, skylights, and vaulted ceilings.

The rebounding wizard bought it in the 1990s, and owned it for about a year, before selling it for $1.1 million, according to the L.A. Times.

Rodman, who dishes in the book on his bouts with alcohol abuse, eventually returned to Orange County. He has lived in Huntington Beach and then Newport Beach, the Orange County Register reports.

The 84-year-old owner and chairman of the Chicago Bulls, Jerry Reinsdorf bought the team in 1985 for $16 million. He’s since watched his investment spin into gold, thanks to the six titles of the 1990s. Forbes’ 2020 NBA team value rankings pegs the Bulls current value at $3.2 billion.

Reinsdorf has also tried to turn a profit in real estate—although the return is meager compared to his ROI on the Bulls.

The couple also owned a two-story, 4,062-square-foot, home in Chicago’s tony Gold Coast at the time, which they bought in 1991 for $1.3 million, the Chicago Tribune reported.

10 Questions to Ask a Mortgage Lender: Do You Know Them All? History often repeats itself — but when it comes to the current housing market, don't hold your...
Continue reading
by admin 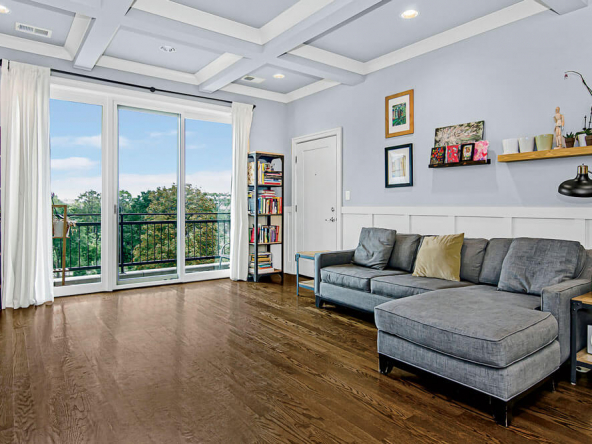 NOTES: Median sale prices are for 2021. For Chicago neighborhoods, the data is for townhouses and...
Continue reading
by admin 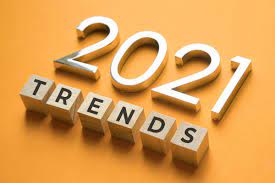 2021 Real Estate Trends Real estate trends are always in flux. Here's what you need to know about...
Continue reading
by admin