Ukranian Village is located on the near west side of Chicago.

In the aftermath of the Chicago Fire in 1871, German Immigrants developed the area.

But after the first of wave of Ukrainian and Russian immigration from 1880 to 1910, however, Ukrainians outnumbered other ethnic groups in the neighborhood. By 1930 estimates placed the Chicago Ukrainian population between 25,000 and 30,000, and the majority resided within this small, 160-acre tract.

By 1990, only 2,500 people living in the Ukrainian Village claimed to be of Ukrainian descent, and many of the residents were young white professionals

with no Ukrainian heritage. The cultural impact of Ukrainians on this neighborhood, however, is still apparent, evidenced by many institutions, including churches, the Ukrainian Cultural Center, the Ukrainian National Museum and the Ukrainian Institute of Modern Art.

Ukrainian Village is a community where tradition and innovation seamlessly coexist, yet there are distinctive areas for certain lifestyles. Along the main avenues (Chicago, Damen, Ashland, Division, and Western) are multi-family units and some freestanding homes that are costlier than other options in the neighborhood. As these streets are along the main roads, expect to hear more noise and have more traffic immediately outside your door.

Farther into the neighborhood, along its network of side streets, the style shifts more towards frame two-flats, ranch homes, and workers cottages — the historic housing style of Chicago’s working class. These homes tend to be more modestly sized, as they were constructed to be functional residences for smaller families. These areas are quieter, with tree-lined streets and narrow roads.

Redfin named Ukrainian Village as 2016’s hottest neighborhood.  Why?  It has significant architecture, including Ukrainian Orthodox churches.  And the main area around Chicago Avenue, is popular for its restaurants and nightlife. Its neighbors, Wicker Park and Bucktown, are fast growing. Another appeal of the neighborhood is its character and charm. Most of Ukrainian Village is landmarked and developers choose to gut the interior to create a single-family home. This strategy has a high ROI while maintaining the historic façade of the neighborhood. 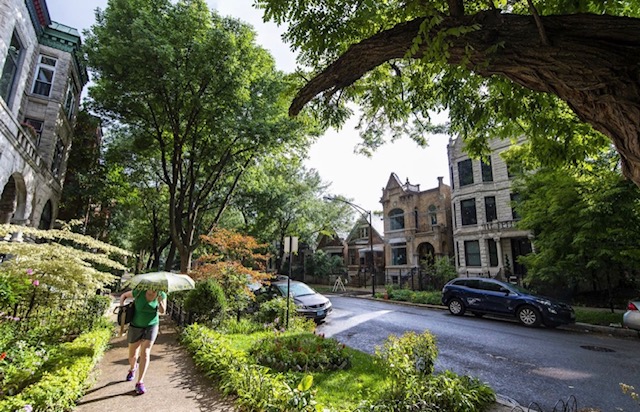