Wicker Park is located two miles northwest from downtown Chicago. Wicker Park is bordered on the north by the Bloomingdale Trail, on the south by Division Street, on the west by Western Avenue, and on the east by Ashland Avenue.

It’s one of Chicago’s hippest and trendiest neighborhoods with a history of great architecture and a location only miles from Downtown. It has great food, shopping, and all varieties of the arts.

Commuting to Chicago’s Loop is fast. Public transportation is plentiful, with easy access to a number of bus routes (72 North Avenue, 70 Division, 49 Western Avenue, 50 Damen Avenue, and 73 Armitage) which connect to CTA rapid transit lines. There is also the 56 Milwaukee Avenue bus which goes directly into Downtown. There are CTA Blue Line stops at Division and at Damen which connect to Downtown, suburbs and O’Hare airport. Just to the northeast is the Clybourn Avenue stop on the Metra commuter railroad which connects to Downtown as well as the north suburbs. The nearby Kennedy Expressway is a great option for drivers.

After the Chicago Fire of 1871, rebuilding continued after the turn of the twentieth century, and there are still structures from that era that dot the community. Many of the Norwegians and Germans who first migrated to the area built their homes of brick and stone to avoid the threat of another major conflagration.

As with most neighborhoods going through gentrification, it has also seen considerable new construction. So, today there is an eclectic mix of 100-year-old Brownstones and Greystones sitting side-by-side with modernistic condominiums. 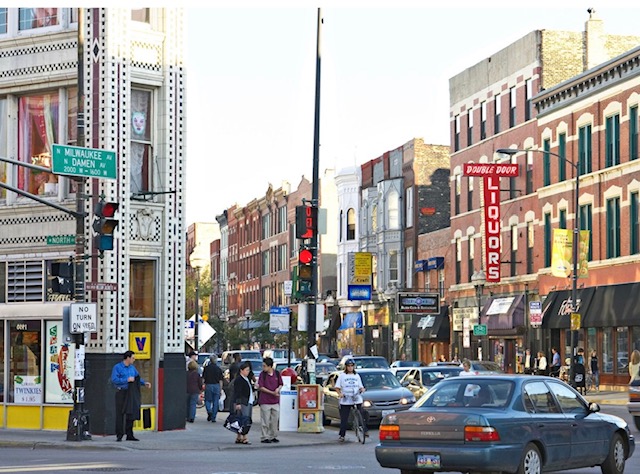